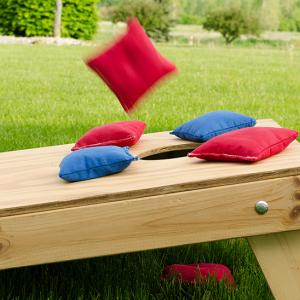 Cornhole League is about to begin! The 8-week season will be on Wednesdays OR Thursdays at 6:30 and we will play in the back hall. The first night of play will be January 27/28. The cost for the season is $40, with all of the money returning to the players based on your wins. There will be an informational and sign-up meeting on Thursday, January 21 at 6:30. We will also be playing mini-tournaments for anyone who just wants to try it out. You ABSOLUTELY MUST either show up to the meeting or contact Marsha Warrington (419-704-7954) or Dick Schuller (567-202-7760) by January 21 to be included in the league. Because we need to know an exact number of players to create the schedules, you may NOT wait until the first night of play to sign up. Due to space limitations, we can only hold up to 32 players each night, so previous league members will have the first opportunity to join. If needed, we will also go by seniority in the league. You must be a Sylvania Moose member in good standing to join. If you can’t commit to the league or know that you will be missing several weeks, please consider being a sub. You could also just show up around 8:00 any Wednesday or Thursday for our post-league tournaments.

Signup to receive the latest news, articles, and resources from the Lodge sent to your inbox.

Thank you for subscribing!